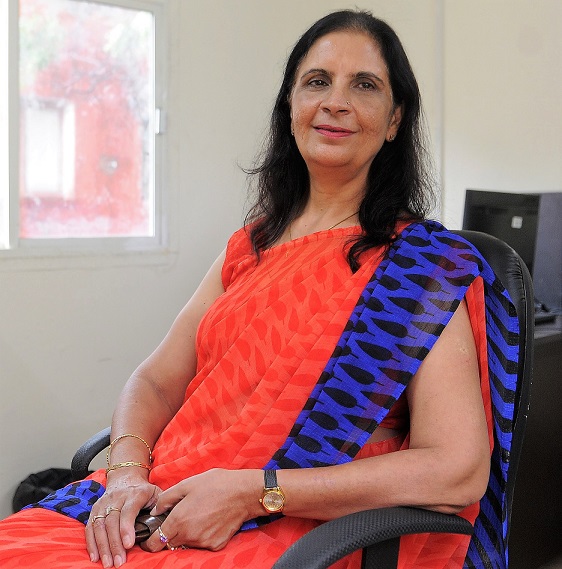 Preeti Monga is the Founder and CEO of the Silver Linings Trust and Silver Linings Services and the Panel Expert with Enable Travel! Her Work encompasses, education, trainings and employment of blind girls / women, promoting Inclusion of People with Disabilities into mainstream society via FUSION events and other programmes, empowering blind women via the DIGNITY programmes, promoting independent travel for people with disabilities, facilitating Cornea Retrieval; in addition, she runs an Executive Search and training business. Herself, blind since childhood, has been singlehandedly working towards improving lives; directly/indirectly impacting millions through her unremitting and arduous efforts for the last 3 decades now! Preeti is the first visually impaired Aerobic instructor known, and today her NGO is running, the Shiksha Preparatory School which educates blind girls under the integrated system; also runs a hostel for blind girls /women along with providing them with all required developmental trainings so they can become productive and contributing citizens! She is a celebrated Motivation speaker, a Life coach, a Leadership and Fitness trainer, promotes employment of Disabled, is a consultant for Prevention of Sexual Harassment at Workplaces, & is a Trauma counselor!

Some of her prestigious awards are: The National Award 2013 by The President of India, Exceptional Achievement in Entrepreneurship Award from the Delhi Government 2015, the ‘Red and White Bravery’ Award, the ‘Rajeev Gandhi Manak Seva’ Award; in addition, she was Awarded the Ashoka Fellowship and also the Karamvir Fellowship, and many more!

She started out her adult life with matrimony and motherhood; which led this already visually impaired young woman into further adversity. Her skillfully developed fighting spirit and her burning desire to earn self-respect and freedom, steered her to become an Aerobic instructor (the first blind person to have taken this on as a career), and simultaneously worked as a computer and English teacher and at one time, was a single mother as well.

Discover the ability within!

Here is her story in her own words.

"Born in 1959, in the Holy city of Amritsar in India, found myself challenged with a major disability! Then, as I grew up, I discovered with in my soul, a burning desire of living life on my own terms! The wish to fulfill my dreams and aspirations and need to survive taught me to swim through this beautiful and bountiful world, aided efficiently by my other senses!

When I was in class 2, constant complaints from my teachers regarding my unwillingness to participate in written activities began to alarm my parents. A meeting with my teachers and their own confidence in my sincerity maneuvered them towards a thorough medical exam for me. This agonizing experience brought fourth my disability. The trauma that followed must have been nerve shattering for both my parents!

At this time we were stationed in the remote township of Agartala, the capital of Tripura, where medical and rehabilitation services were scarce. My parents simply had no idea as to what they must do next. They definitely had the option of admitting me to a school for the blind, but this, fortunately for me, made them shudder. As the condition of these scarce institutions was even then more than appalling so they continued to bring me up as they were doing.

I was taught everything, only it was done in a way I was able to grasp and absorb the knowledge being imparted. For example, mummy would close her own eyes and develop her special style of doing particular activities, and then she would teach me the same; so as to enable me to quickly learn without the aid of eyesight all that I needed to know. Thus, life began to move forward sprinkled lavishly with more than my share of challenges, but embraced between the arms of encouragement and love, I trotted along the bumpy road of life with extraordinary enthusiasm.

The first major setback came along when I was thrown out of school at the end of class 8, on the pretext that I was blind. My formal education came to a standstill as no other regular school wanted to admit me even after great efforts of my parents. Poor quality schools for blind were the only other option left, which was unacceptable. Therefore I had no school to go to and stayed at home and was put to learning music. But as I did not have an aptitude for the same, I could never excel in it. And my dream was to become a world famous sitarist. This crashed in my face after I had put in 8 years of very hard labor!

Another of my big dreams was to get married to the man who would be my best friend, life partner and an honest and sensitive human being. And, I would like you to get a glimpse of the torments I was subjected to, for simply daring to dream such a dream, only because I was blind.

Interestingly, boys / men most willingly chose me for their girl friend but they all took to their heels the moment they detected the slightest of risk of getting anywhere near a chance of tying the knot with me! An arrange marriage was out of the question, for normally, no man will willingly marry a blind girl. So, all that I got at this time was pitiful glances and suggestions that I marry a blind man or marry someone from a very poor background.

It was not as if I was against this idea; but, the man I would marry, most certainly had to fit the criteria of my dream husband. The advisers did not take to this favorably, "she should be grateful should anyone in the first place agree to marry her; instead, look at her audacity," they scorned, "she can't see a thing and expects the best in the world"! Thanks heaven, my parents stood their ground and made it clear that marriage for me would be entirely my own decision!

Then came the day I met my first husband. He seemed to fit into my criteria of a dream husband, thus, we were married in the year 1982. Little did I know I had landed myself into the fire from the frying pan! The marriage was on the rocks right from the first night and before I could recover from this devastating blow, I was a mother of two children. I kept trying to make things work but they only got worse.

By 1986, I knew I had to do something about getting the children and myself out of the mess we were in. To do this, I had to first become economically independent, and that meant finding employment. But what would I do? No one would give me a respectable job with a class 10 education! But my mind was set, I had to make my life livable, my children and I all deserved much better than this. Life only comes once and no one or nothing has the right to destroy it. My spirit was screaming for freedom and joy and I had to obey!

At that time the only skills I possessed were being a good homemaker and a reasonably good typist, and I had a very basic knowledge of music, a serious disability along with, two very small children! It took me over a year and a half, of going through a most painful process of hunting around for some way to earn a living, the idea of becoming an aerobics instructor struck me! Here too, I had to force my way into enrolling for the instructors training programme, for I was told that nowhere in the world is there any blind aerobics instructor, hence, there was no system by which they could train me! I simply insisted, till I was taken on as a trainee!

However, when people discovered I was there competing for my place in the main stream, they made life even tougher for me. Why should a blind woman be walking shoulder to shoulder with capable non-defective humans? She can be bestowed with pity and charity but how can she be allowed to live along side, enjoying equal status with us? This still remains an uphill battle; one that I am a female and the other that I am a disabled one at that.

I do get a lot of appreciation on the surface but not many make life smooth for me. It is one thing to poor thing me and a completely different thing to acknowledge the fact that I am as good and at times better than them despite my disability. But again, I had learnt by now, never to give up. "Try again and you will succeed". I just did that.

In 1993, I finally separated from my first husband, and my children and I moved into my parent's home. In 1994, I took up a full time job at the National Association for the Blind as a resource teacher, and to supplement my income further, I started to sell pickles! I sold pickles everywhere I could, door to door, on the streets, in kitty parties and shops; and my huge sales actually won me the job of Marketing and Sales Head at this pickles company! It was in this company, that I met my second husband. Although he was almost 10 years younger to me, I knew he was the one I had been hunting for! We have been married since 1996, and this time there was no mistake.

Today I have my own not for profit organization called 'Silver Linings; which works towards education, residential and vocational facilities for visually impaired girls/women! We, in addition, work towards promoting inclusion and empowerment of people with disabilities and towards helping every human being live to its fullest! For here we believe that, ‘life comes only once…so might as well…live it real well’! To be able to sustain my NGO, I run a for profit company called ‘Silver Linings Services’, which is an executive search and corporate training company! Am a consultant for POSH (Prevention of Sexual Harassment at Work places), with various companies and a panel expert with Enable Travel, a company that offers independent travel solutions for people with disabilities and the elderly! We actively promote employment for people with disabilities as well!

My autobiography has been published by Roli Books, called The Other Senses! And the second part of my autobiography, which holds all the deep dark secrets of my success, and which you can also use to find yours, is soon going to be coming into the market! This book is called: ‘Flight without Sight’, and is under publication by Hay House!

Am a proud mother of two children and a very happy grandmother of three. I have a wonderful husband, a loving family, a beautiful home and great friends in addition, am living my dream both personally and professionally!